On this night we saw three titles decided under the ceiling of Hell in a Cell capped off with Sasha Banks defending her Women’s Championship against the former two time champion Charlotte. What went down in Boston?

Fantastic match. I really enjoy seeing Nese, Gulak, and Alexander on a frequent basis. I couldn’t be happier to see that all the negative filth from the OG Sin Cara washed away and the current Sin Cara out there looking impressive. Lince Dorado looks like he could be a valued asset for the Cruiserweight Division. Would be cool to see a heel Kalisto have a program with Dorado. Daivari is a highly underrated, technically polished competitor who can only be a positive as well. Great match. I don’t know if there is more the Cruiserweights can do to get the brass and the casual audience to really get behind them.

Roman Reigns (c) vs. Rusev – Hell in a Cell for the US Championship

This would have been a pretty good match, if it was on Raw. Both men worked at a slow methodical pace for the beginning of the match leaving me waiting for the action to pick up. There was a kendo stick. There were stairs. There was even a chain used by Rusev to enhance The Accolade. In the end Roman was able to fight out of the Accolade on steel steps. Rusev, still standing on the steps, gets speared into the mat for the three count. Again good match, but not a good Hell in a Cell match.

Nothing worthy of note with this one. Dana did show some improvements with her performance doing a good job targeting Bayley’s bad arm. In the end Bayley gets the win with the Bayley to Belly.

Enzo and Big Cass vs. Gallows and Anderson

Decent tag match. Enzo seems to be improving his ring skills which is great. Gallows and Anderson get the win with the Magic Killer so I hope this means we continue to see them in a serious threat.

Kevin Owens (c) vs. Seth Rollins – Hell in a Cell for the Universal Championship

During the match Owens broke out a fire extinguisher that he couldn’t quite handle. Owens ends up spraying the referee in the face with said extinguisher. The outside official opened the cage to assist the incapacitated referee when Chris Jericho comes sprinting down the ramp and locking himself in the cage. From then on the match basically became a handicap match with Jericho and Owens working together to inflict damage to the back of Rollins. Highlight of the match was Rollins sending Owens crashing through two tables on the outside. In the end the two on one assault was too much to overcome for Rollins. Owens powerbombs Seth through two chairs to pick up the win and retain the Universal Championship.

TJ Perkins (c) vs. Brian Kendrick for the Cruiserweight Championship

I thought the build to this match was intriguing and creative enough to make the Cruiserweight Division matter under the WWE umbrella. However the lack of crowd energy for this one makes me feel like either A) putting the title on TJ or B) having TJ face Brian Kendrick for a third time was not a good call. There was nothing wrong with this bout at all. Kendrick continues to show his expertise is on another level by using Perkins’ wrist tape to trap him on the bottom rope. Kendrick attempts Slice Bread #2 but TJ fights him off. On the landing Kendrick tweaks his ankle pausing the match. A compassionate Perkins goes in to check on his opponent. Kendrick strikes Perkins with a headbutt and locks in the Captain’s Hook! Perkins tries to fight out but in the end he taps. Brian Kendrick is the new Cruiserweight Champion.

The New Day (c) vs. Cesaro and Sheamus for the RAW Tag Team Championship

This was so far my favorite match of the night. Everything was crisp at a great pace that kept you focused on the match. I particularly enjoyed seeing Xavier Woods. Towards the end of the match it looked as though Sheamus and Cesaro were able to set aside their egos and focus on getting the titles. Cesaro has Woods in a pretty deep Sharpshooter smack dab in the center of the ring. On the outside Big E attempts to break up the submission but gets cracked in the back by Francesca II thanks to Sheamus. He tries to hit Kofi with the trombone but Kofi ducks and hits Sheamus with Trouble in Paradise…in front of the referee. He calls for the bell, Sheamus and Cesaro win via disqualification which means the title cannot change hands. Highly enjoyable match.

Sasha Banks (c) vs. Charlotte – Hell in a Cell for the RAW Women’s Championship

This was certainly a match to be talked about. I loved the idea of Charlotte attacking Sasha before the bell. Table spot? On the outside? Loved it. The gurney spot during the opening was expected but it went a little too long. From the point of restart to the end the ladies did one hell of a job throwing caution out the window and bringing the pain. Although there was no carnage of the blood variety but again there were plenty of spots that would make anyone cringe. The end came when Charlotte grew tired of the display of valor from Sasha and started tossing her like a rag doll onto a table propped in the corner. Sasha’s limp body rolled off and was in prime position for a Natural Selection from Charlotte. 1…2…3! Charlotte is now a three time Women’s Champion. This match wasn’t what I expected it to be. I don’t think it matched anyone’s expectations. However it delivered. And it was most certainly worthy of closing the show. 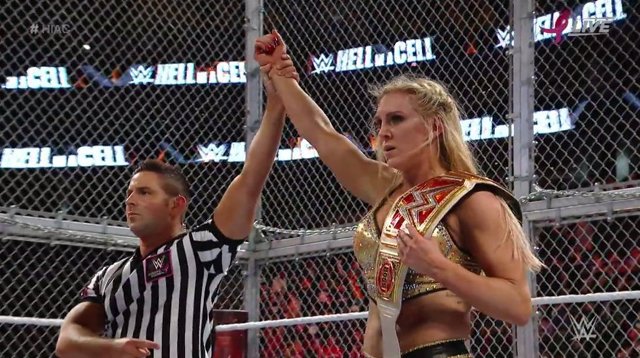 Overall I thought this was a decent show. Nothing too crazy and nothing that really wowed me but certainly an enjoyable watch. The only negative takeaway I have from this show is that there wasn’t enough of the carnage that you would expect to come from a Hell in a Cell PPV, especially with three HIAC matches on the card. Everything just seemed like it would have fit on a great episode of RAW rather than a Network PPV. Here’s how Twitter graded the show:

So how do grade the #HIAC PPV? What did like/dislike? #WWE

//platform.twitter.com/widgets.js
You can scroll through our feed to see how Twitter each match for the night! Don’t forget to comment below or reach out to us on social media to tell us your thoughts on the show!